We’re back with another Meala Mini Feature! This time with  Matthew Margerison who created “Invasion!” .

Matt is a UK born, Kilkenny based animator who’s worked on some of our favorite projects as a studio always putting in 110% to what he does – something you’ll see for yourself after reading this in-depth article he created to guide us through his Mini making process. Enjoy!

Hello! My name is Matt and this War Of The Worlds fan animation was my first mini for Studio Meala. It was also the first time in a long time I’d tried to make a little short piece of animation from scratch all by myself, so I felt like I had a lot to prove not only to other people but to myself too! That led to me perhaps being a big eager and making more of a meal of it than I could have done, but I learned a lot and I hope I can pass on a few of those lessons!

(below are 2 gifs of the first concepts!)

After roughing up a couple of concepts I decided I wanted to make a single shot that told a story. The aliens rear up huge on screen, some canoneers take one down winning a small victory, before they’re laserbeamed to oblivion by the unstoppable aliens! After that I made a 2nd pass of the version that I liked and ended up the gif below. I think it’s important to show these messy sketched out ideas particularly to any students reading, because often when I was studying I would only learn from analysing other artists final, clean, impressive pieces of animation. There’s a lot to be gained from seeing the guts of other people’s work though, so here it is!

(a gif of the final ‘animatic’ I guess, rough pass of the whole thing!) 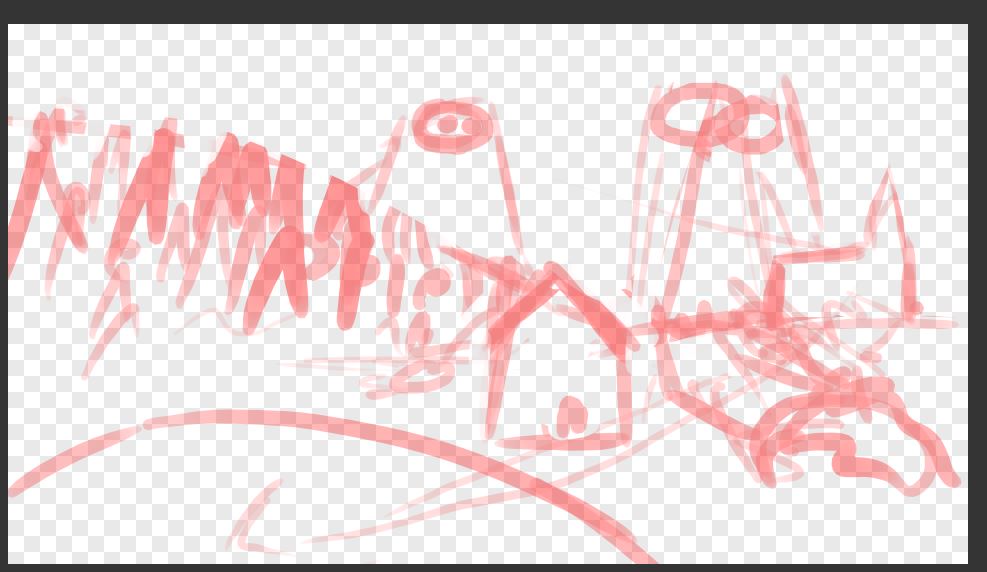 To start with I knew that the most important thing for me was to show the scale of these monsters, they’re massive. I wanted to fill the screen with them before pulling out to show the cannon, and that meant that I needed to learn my first new trick, how to do camera moves! I mocked up a couple of sketches of what I thought the first and last camera positions should be, and through liberal use of vanishing points and some great big cheats I got them figured out and locked down first. I knew that if they worked, then I could just slide and scale the elements into place in just a few frames and the illusion would work well enough. 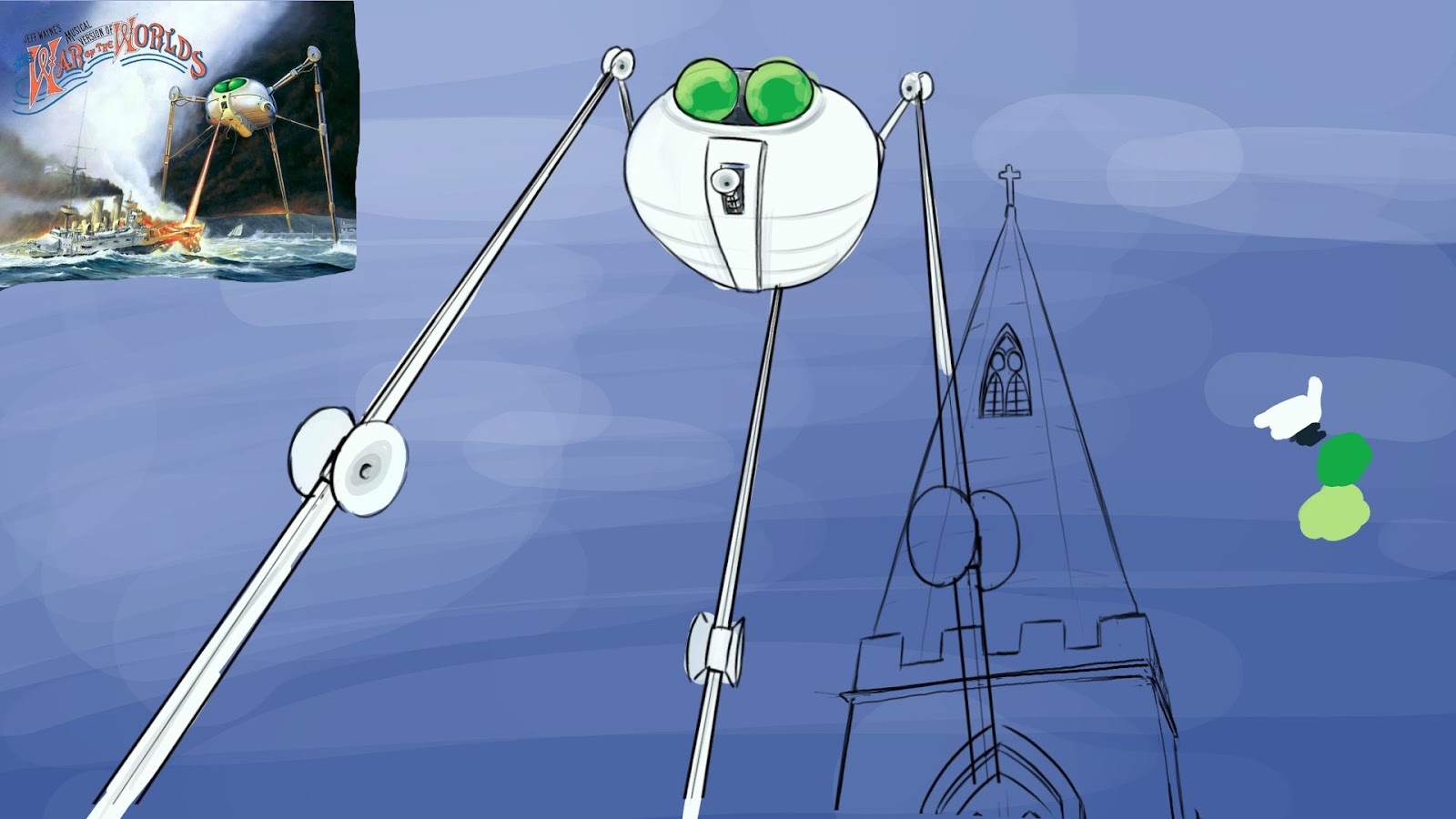 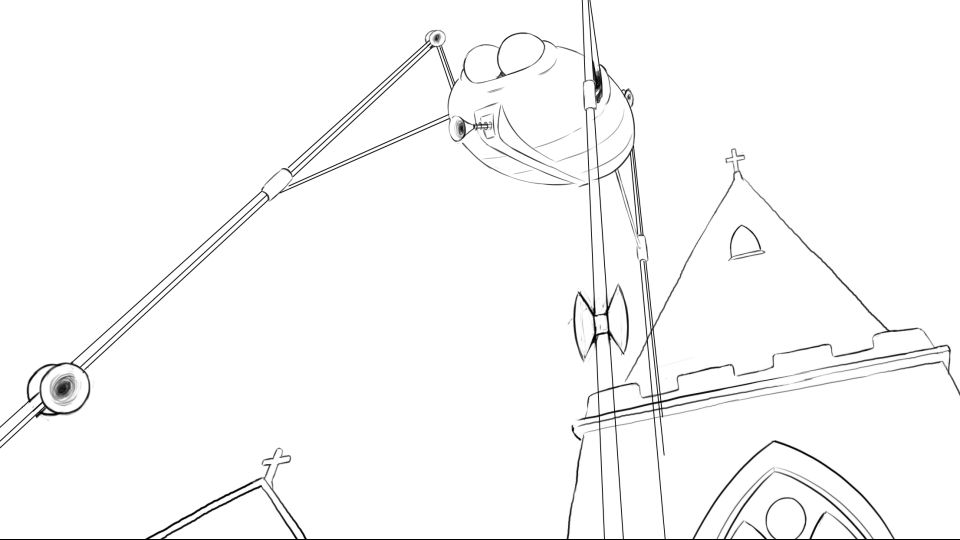 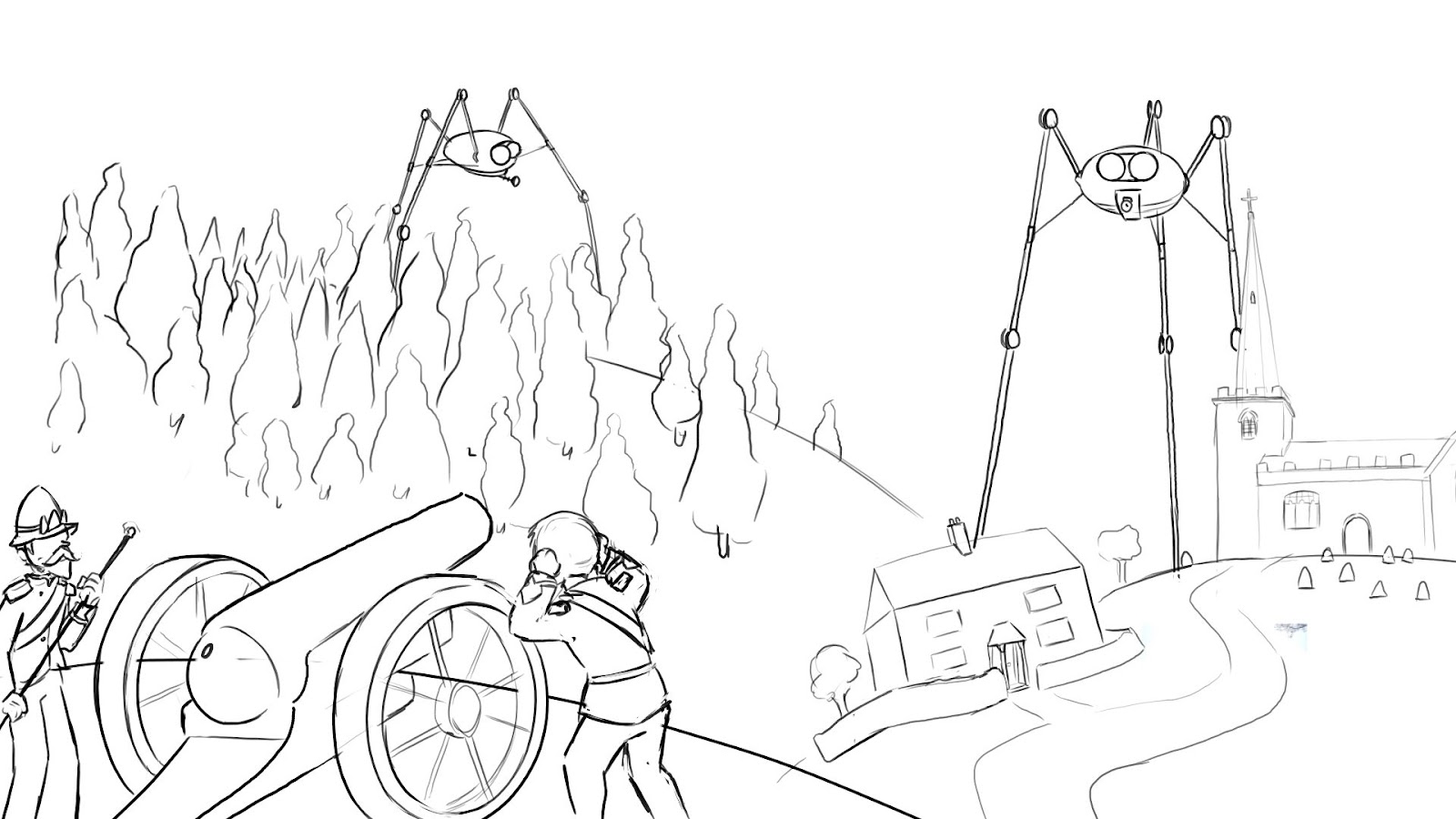 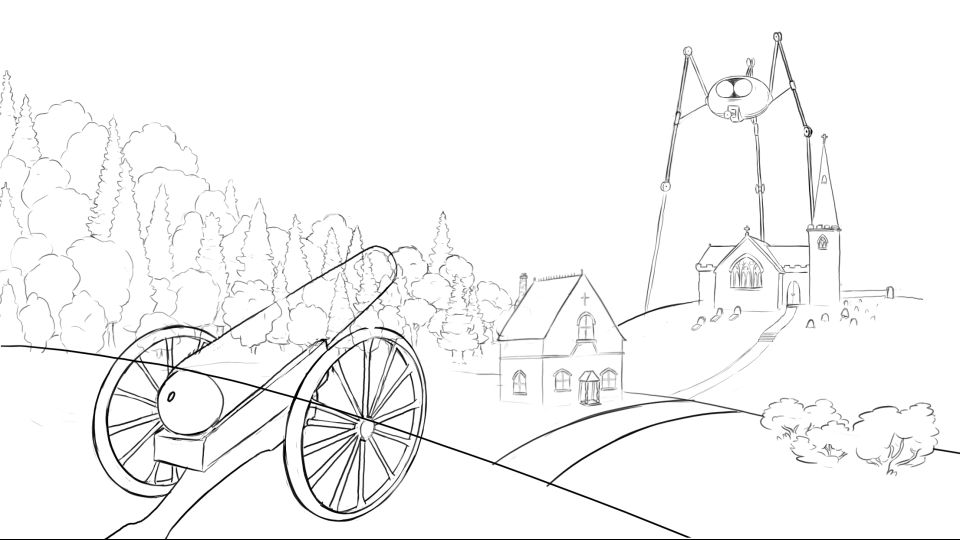 When I’m left to my own devices I have a very ‘sculptural’ kind of workflow. Some animators are able to see exactly what they want from the get-go and work towards that vision, but everybody is different and for me I really have to see something moving before I know what works or what doesn’t, and then polish it one piece at a time. One of the biggest lessons I learned on this project, that I’d like to pass on if I can, is to embrace your own workflow and make it work for you instead of trying to imitate other people’s.

For example here, in the gif below you can see that I created the inbetweens for the camera move with very clean, tied down drawings. When I tried mocking up the camera move and saw that it wasn’t working, I shifted things around a lot, skewed and scaled things and did a lot of work to try and make those drawings work. This was a pain and in retrospect, I should have mocked up very quick, rough inbetweens and added details with each pass. I wasted a lot of time drawing the church and the house many times over before realising I had the angles wrong and having to start again!

Once I had the camera move working I moved on to the next new challenge, exploding a thing! I was looking forward to this bit because I’d never done FX explosions before and had no idea where to start. I knew I wanted the tripod to explode outward with a kind of spherical explosive force so I just mocked up a little guide for myself to follow like in the gif below, and then added debris and smoke layer by layer. At one point I toyed with the idea of adding some goopy alien guts because the aliens inside are like the machines’ brains, but it didn’t really work so I scrapped it, I’d given myself enough work already!

(here’s a gif of the mocked up first pass of the explosion!)

The next big new challenge for me was to add some cool FX to the animation. I wanted to do smoke and fire and laserbeams and it was going to be awesome. Learning FX is a whole thing in it’s own right and some artists specialise in it for their entire careers, it’s very different to animating characters. Luckily for me I had access to some wonderful FX artists that I could show my work to and get feedback from, and I studied reference videos of cannon smoke and bonfires.

One thing I learned was that animating a burning house wasn’t like animating a burning candle and just scaling it up, it’s a whole other beast! Animating fire and smoke is about animating the effects of forces you can’t see, the wind pushing one way, and the rising heat pushing the shapes upwards. It’s fascinating to learn how flames behave, and I’d recommend studying it as an animator! You might find a passion for effects!

In the story, the Martian’s weapons are invisible heat rays. I wanted to convey the energy of the laserbeam and I wanted to show it cutting left and right and blowing things up, but I wanted the beam itself to be invisible. I thought long and hard about how to make that work, and then I watched a lot of anime and this is what I came up with.

(a gif of rough of the flames and laserbeam!)

After all of that the final thing for me to do was to finish the fire. I roughed out the motions that I wanted, the billowing rising heat and the laserbeam cutting through the flames, and then I went straight ahead over my roughs just drawing the big flame shapes on different layers. In the end I had worked a lot longer on it than I had planned to, so I scrapped the idea of adding gunners to the canons and allowed myself to leave it there! Sean and the team helped to come up with a nice simple colour palette and Olga helped me to comp it, doing incredible work to make it feel really polished. I’m grateful for their input, and very proud of what we ended up with!

I treated this whole mini as a learning experience, and so here are a few lessons I learned from it that I would encourage young animators to think about!

I hope that any of that was useful to somebody! If not I just hope you enjoyed seeing some cool WIP gifs and my messy animation thoughts. Here’s one last gif of the final thing before colour and comp. Enjoy!

Huuuge thank you to Matt who went above and beyond creating this piece!

If you haven’t checked out Matt’s Mini yet you can find it here: https://youtu.be/nVgDXlaOhJE

Matt’s work can be found online at:  https://twitter.com/MattMargerison

Here’s Episode 9 of the Studio Meala Podcast, presented by Owen O’ Donnell (The Infinite Review) In Episode 9 Owen catches up with Ink +

Here’s Episode 8 of the Studio Meala Podcast, presented by Owen O’ Donnell (The Infinite Review) In Episode 8 Owen gets toasty by the Studio

Here’s Episode 7 of the Studio Meala Podcast, presented by Owen O’ Donnell (The Infinite Review) In Episode 7 Owen catches up with friend of